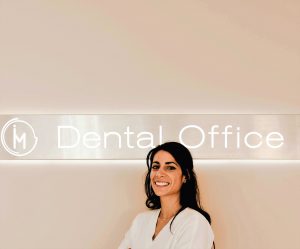 The dentist Ioanna Margoni was born in Athens. The year of 2012 after 5 years she graduated from Nation and Kapodistrian university of Athens.
After finishing her DDS she did her first MSc in City Unity College on Implantology and Laser treatment On the meantime, she was working in a dental Clinic in Kolonaki, Athens for a year acquiring experience in implant placement and tissue regeneration with the use of growth factors from blood after centrifugation.

Her research with title “A Case-Study of Seven Dental Implants Placed in the Maxillary Sinus with Intentional Schneiderian Membrane Perforation”  was published in the journal JIACD in 2014.,vol6.,No.1

During the 2012-2017 she permanently lived in the United Kingdom where she worked as an associate dentist acquiring large experience in the whole spectrum of curative , restorative and aesthetic dentistry of adults as well as children.
The year of 2013 she acquires the certificate of contemporary Endodontic treatment,
the year of 2016 she gained the title of Msc in Conservative Dentistry and Prosthodontics from the well known university UCL (Eastman Dental Institute) of London, U.K
this Master of Science gave her a deeper insight and specialisation in Dental Implants and full mouth rehabilitation,as well as, the aesthetic dentistry.
At her post-graduate dissertation she was interested in laboratory growth of microbes on dental materials and the ways of eliminating them.
The research paper was also published from the scientific journal IJP the year of 2018.
After finishing her post graduate studies she continued to work in specialised Dental Practices in central London and more specifically in Chelsea, Bayswater and City of London as well as in BUPA practices.
Her special interest is in complicated cases tha need restorative dentistry and patients with dental phobia.
In the year of 2016 she also acquired the certificate in restorative treatment in the aesthetic zone from Harley Street of London.
She attends Seminars and congresses that take place not only in Greece but also world-wide. Her Goal is to be constantly updated in order to provide the most cutting edge treatment.